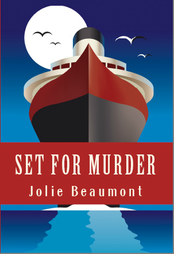 Get Set for a New Mystery from Jolie Beaumont:
SET FOR MURDER

Enter the glamorous world of transatlantic sailing and show business, with this traditional British mystery that will keep you guessing until the very end.

It’s the height of the Depression, but for Penny and Nick Garnett, two young Broadway stars about to make their London debut, life feels like one long musical comedy show. They’re traveling first class on a glamorous ocean liner along with English nobs, a mysterious Polish countess, and the dazzling, flamboyant Duchess of Tarrington. But just as they’re getting used to living the high life on the high seas, the Duchess of Tarrington is found murdered in her cabin.

Who would want to murder the young and beautiful duchess? That’s the question Scotland Yard Inspector Guy Travers must solve. When he begins to suspect an over-the-hill vaudeville performer, Penny and Nick rush to help their thespian friend. But with the ship now turned into a SET FOR MURDER, will they solve the mystery before the murderer comes back for a second act?

Set For Murder, the first book in the Showbiz Is Murder mystery series, is on sale now at Amazon.
The Theo Bryght, Runner Mystery Series