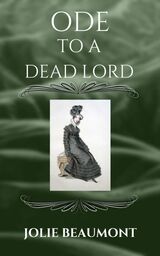 ODE TO A DEAD LORD
A Theo Bryght, Runner Mystery
"A brilliant story about murder, deception, and love."
- The Regency Inkwell

Wellington is fighting Napoleon's army in Spain, Lord Byron is dazzling the Beau Monde with the first Canto of his Childe Harold's Pilgrimage - and Viscount Percy Ainsford Foster Ashe is discovered dead in a shabby boarding house in Brighton.

It is assumed that the young man, whose gambling debts were considerable, has committed suicide. But then a suspicious silver locket is discovered by Lady Charlotte Ashe, the dead lord's now penniless widow, and Theo Bryght, a Bow Street Runner from London, is called in to investigate what is now suspected to be murder.


Who would want to murder Viscount Ashe? Is there more to his gambling addiction than meets the eye? Is there any chance that Lady Ashe will ever recover her lost fortune? These questions haunt Lady Ashe after she returns to her home in the North York Moors - for as she soon finds out, her husband's death may be just the first canto in a deadly ode to revenge.

Prologue to Ode to a Dead Lord

This is the end of the free excerpt. Purchase the book at Amazon.