Reviews for Ode to a Dead Lord 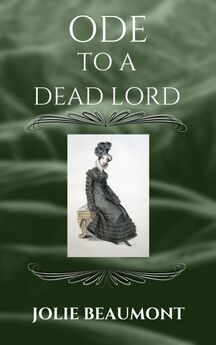 Ode to a Dead Lord by Jolie Beaumont Ms. Beaumont’s “Ode to a Dead Lord” is a brilliant story about murder, deception and love.  Young Lord Ashe is found dead – an apparent suicide. However there are others who believe that he was murdered, including his now penniless widow, Lady Charlotte Ashe.

Prior to marrying Lord Ashe, Charlotte was the granddaughter of a wealthy tradesman. Wanting to buy his granddaughter a title, something that was often done in Regency period, he approves of her choice for a husband and settles all of her fortune irrevocably on the young man.

Ms. Beaumont’s Charlotte is wealthy unlike Jane Austen’s (1775-1817) the Misses Bennets of Pride and Prejudice and the Misses Dashwoods of Sense and Sensibility who were either in danger of being left penniless or left with very little to manage in a male dominated society.

Ms. Beaumont underlines the simplicity of the story with social issues of the Regency period that affected both men and women. Many of these women’s fortune, upon marrying, were automatically turned over to their husbands.

Beaumont complicates the story further by adding a male’s perspective; like Austen’s Willoughby of Sense and Sensibility, who is threatened by a distant aunt to marry well or risk being left penniless should he settle on Miss Marianne Dashwood.  Ms. Beaumont brings us Mr. Theo Bryght. Mr. Bryght, nee Nathaniel Clermont, is the younger son of the fifth Earl of Warrington. Unlike Willoughby, who would rather lose the woman he loves for the comforts that wealth could bring him, Clermont chooses to go against his father’s wishes – to join the clergy.

Clermont is disowned. The uniqueness of Beaumont’s hero and what separates him from Willoughby lies in his belief that ‘to thine own self (he must) be true’. He would rather risk the comforts of living well than to risk his self-worth and integrity. Needing to earn an income, Nathaniel Clermont becomes a Bow Street Runner – a member of London’s professional police force. Ms. Beaumont uses Clermont to show that women were not the only ones in Regency period who were often left penniless and thus find another means of earning their living.

Ode to a Dead Lord is well written and flows easily while several story lines are interwoven.  Ms. Beaumont ties all loose ends with the exception of the relationship between Theo Bryght and Charlotte Ashe. One can only hope (I know I am hoping) that she intends to bring us a sequel, where both Theo Bryght and Charlotte end up together – though they do go as far as admitting to themselves how they feel about the other. I think that Ms. Jolie Beaumont is sitting on wondrous gold mine of untold stories about Mr. Theo Bryght and his future investigations alongside his lady love, Charlotte Ashe. Reading about these bow street runners, I think of Ms. Anne Perry’s Victorian period hero of the “Inspector Pitt” series.