SET FOR MURDER: An Excerpt

Buy it at Amazon! 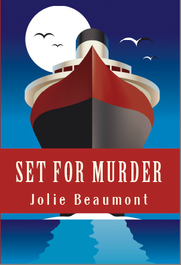 “ISN’T IT HEAVENLY?” Penny Garnett was standing on the deck of an ocean liner sailing toward England. With a graceful flick of her hand, she swept back the strands of hair that had fallen over her eye. A professional dancer, she had a full repertoire of graceful gestures. But this was the first time she was using them on board a ship that was first class in every way.

The other half of the song and dance act, her brother Nick Garnett, nodded his head absentmindedly, while he tapped on the railing with his fingers.

“I just love the way the sun is tinting those clouds a dusky rose,” Penny continued.

“And look at that mermaid playing in the waves. Isn’t she adorable?”

Penny gave her brother a swift smack on the back with her pocketbook.

“Sorry. My hand slipped. But don’t pay any attention to me, Nick. You go back to whatever it is you’ve been thinking about for the last eight hours and pretend I’m not here.”

Nick laughed and gave his younger sister a quick hug. “I guess I have been neglecting you. But I’ve been thinking about the show and—”

Penny put her finger to his lips. “And I thought we said we would forget about the show and enjoy ourselves. It isn’t every day we get to sail across the Atlantic and mingle with the rich and famous.”

The two glanced up and down the deck, which was lined with deck chairs. Most of them were empty.

“Where do you suppose everyone is?” asked Nick.

Penny looked at her wristwatch, which told her the time was 5:05. Since the watch was slow, she figured it was about twenty past the hour. “I don’t know about the men, but the women are probably changing for dinner.”

Nick glanced at his watch, which was always set to the correct time. “This early? Dinner isn’t until eight.”

“It’s opening night on the SS Good Ship Diamond Lollipops. I can assure you that every woman on board intends to make a grand entrance this evening.” Penny sighed as she thought about what was inside her own very modest jewel case. “I wish Baker had included a diamond tiara with our tickets. I’m going to feel very undressed tonight wearing just my garnet necklace from Woolworth’s.”

“Maybe you won’t feel the chill as much if you also put on a dress.”

“You don't need jewels, Penny. You’re the newest Broadway sensation, about to repeat her smash hit performance in London. Everyone will be looking at you, not at those ...”

A very chic looking blond-haired woman had come onto the deck and was making a slow promenade. As she passed by Penny and Nick, the woman nodded her head in their direction. She then adjusted her fur stole—the large diamond on her black-gloved finger glinted in the sun as she did so—and continued on her way.

“Do you think she’s that Polish Countess Tanka or Stefania or whatever her name is?” Penny whispered to Nick.

“Either that or she works at the perfume counter at Macy’s.” Nick pointed his nose up to the sky and then thumbed it, to show what he thought of stuck-up women.

Penny, however, continued to stare with fascination as the foreign-looking woman leaned against the rail in an elegant pose and gazed out to sea. “I wonder if that diamond on her finger is real.”

“It’s probably as real as her title.”

“Just because there's a Depression doesn’t mean no one has any money. Oh, look. There’s a man staring at the countess. I wonder who he is.”

“Don’t be so provincial, Nick. The way you talk, anyone would think we never left Kansas City.”

They watched as the man walked up to the countess and greeted her.

“All right,” said Nick. “He’s her former lover. After emptying his bank account, she’s run off with another man, and now he’s out for revenge. See that cigarette he’s offering her? Poisoned. One puff and she’s going to collapse, right before our eyes.”

Penny watched eagerly as the countess took the cigarette and put it to her lips. After the man lit it for her, the woman inhaled deeply and then slowly exhaled.

“Nope. She’s still standing,” said Penny. “It will be just our luck that he is her husband and absolutely nothing exciting is going to happen all week.”

“Luck, indeed. Then you’ll willingly rehearse that new number out of sheer boredom. How about it, Penny? I’ve got an idea for the—”

Penny shook her head. “I’m on vacation this week. The only work I intend to do while I’m on this ship is find me a nice duke.”

“To hang on your arm or your wall?”

Penny, who had turned to go, had inadvertently bumped into a woman who was walking down the deck, accompanied by her companion. Penny immediately typecast the straight-backed, Roman-nosed, and obviously wealthy woman as a dowager.

Mrs. Cora Hardwick, the dowager in question, was indeed a formidable doyenne of Philadelphia’s high society—and she knew it. She raised her lorgnette to her eyes and looked Penny up and down. When she finished her inspection, she folded the glasses and snapped them back into the long enameled handle that doubled as a case.

“There can be no excuse for careless behavior.” With that, Mrs. Hardwick continued on her way, still followed by her companion.

“My, my, my,” said Nick, after the pair was out of earshot. “I don’t think you’ll be mingling much with her.”


Countess Stefania Scharwenka flung her cigarette into the sea. “Your English cigarettes are bitter, Inspector Travers. Like your words.”

Detective Inspector Guy Travers shrugged. He and the countess were old acquaintances, having begun their respective careers at about the same time. When he was a smart but impressionable young recruit at Scotland Yard, she was a beautiful and glamorous jewel thief. He had almost let her slip through his fingers over the Tremont Affair, where a priceless sapphire and diamond necklace went missing during a weekend at Lord Tremont’s country house in Kent. Fortunately, he had been only the junior man on the case and his superior officer had been immune to the countess’s considerable charms. Now, a decade later, he was much wiser. As for the countess, she was still beautiful. But he could see, with a twinge of regret, her day was starting to fade.

“I’m only giving you fair warning,” he said. “The Duchess of Tarrington is on board this ship and so are the Tarrington pearls. As I assume you know.”

“I assume everyone knows the duchess is sailing with us. It was mentioned in the ship’s newspaper, was it not? I read it while the stewardess unpacked my things. Your name, however, was not mentioned. Does that mean you have left Scotland Yard to act as private watchman for an insurance company?”

“Well, you may cast your official eye on someone else, Inspector Travers of Scotland Yard. I, too, am on holiday.”

Countess Scharwenka adjusted her fur stole with an air of defiance and strode through the door that led to the enclosed drawing room. The door slammed behind her with a loud bang.

Inspector Travers didn’t follow her. He had made his presence known to the one person on the ship most likely to cause trouble, and he hoped his warning had been enough. He therefore continued down the deck. When he reached the deck chairs occupied by two women, the elder of them wrapped in a heavy blanket, he made a slight bow in the direction of the blanketed figure. The younger woman was obviously of a lower class than her employer.

Mrs. Hardwick took out her ever-present lorgnette and inspected him. “Are we acquainted?”

“No, madam, I do not believe I have had the pleasure.”

“Then I’ll ask you to refrain from bobbing up and down when you see me.” Having dismissed the unwanted intruder, Mrs. Hardwick turned to her companion and said, “Watson, fetch me another blanket.”

While the companion, a sullen-looking woman no longer in the first flush of youth, hurried to do her employer’s bidding, Inspector Travers made a mental checkmark next to the names of Mrs. Cora Hardwick and Miss Mabel Watson. Before the night was through, he hoped to have familiarized himself with all of the first class passengers occupying cabins on the duchess’s corridor, Corridor B. These precautions were probably unnecessary; barring Countess Scharwenka, there appeared to be no one with a shady or unexplained past. But the Duke of Tarrington played bridge with the head of the Yard, and bridge partners could claim their privileges. Travers therefore continued on his way, to where a young couple was conversing.

They were a good-looking pair, and they clearly were not the honeymooning couple, Lady Margaret, the daughter of the Duke of Tarrington and Mr. Peter Carroll of New York. If they had been newlyweds, they at least would have been arm in arm or gazing into each other’s eyes while they spoke. They certainly wouldn’t have been looking at him, as he approached, which this couple was doing with unabashed interest.

“Pleasant afternoon,” he said to them.

“Rather,” said Nick, trying out his still-new British accent.

“First time sailing across the pond?”

“Is it that obvious?” asked Penny.

“Most of the old-timers do tend to lie low on the first day, until they know who’s who. By the way, my name is Guy Travers.”

Nick shook the extended hand. “Nick Garnett. And this is my sister, Miss Penny Garnett.”

“Very pleased to meet you both. Let’s hope for a smooth sailing.”

Inspector Travers continued down the promenade, putting two more checkmarks on the passenger list stored in his brain. He had to admit, though, that this new addition to his roll call was a surprise. When he had learned during his briefing that there would be a show business duo on the ship, he had envisioned a more hardened and sophisticated pair. Those two were still fresh-faced kids. Unless they were putting on an act.

That’s enough, Inspector Travers, he thought to himself with amusement. At least wait until a crime has been committed before you start suspecting every passenger on this ship!

Want to read the rest? SET FOR MURDER is on sale at Amazon.
If you write reviews, a free review copy is available at Story Cartel through February 17, 2017.